Love is the word. I love the beer scene in Portland dearly. Exploring the drinking culture in this town enriches my life so much that I feel a visit every few months is now required to maintain peacefulness and sanity. Portland beckons me constantly and teases me with the idea that life could be like it is here, that some day I may actually move home and settle in where I belong. For now I have to suffer through the occasional weekend vacation where I undoubtedly eat and drink myself stupid.

My apartment rental in southeast Portland is ideal. Hair of the Dog is only blocks away, and within a mile there are roughly two dozen breweries, taprooms, beer-focused bars and bottle shops. Just down the road, Division & 12th has quickly turned into my favorite intersection in Portland (what, you don’t have one?). With APEX and The Beermongers caddy-corner, the serious and dedicated beer traveler can spend an entire weekend entertaining themselves constantly sampling new beer by stumbling back and forth across the street. Beermongers is especially fun. Tap or bottle, to-go or on-premises, your call. See a bottle you want, pull it from the cooler and get at it. Easy breezy. 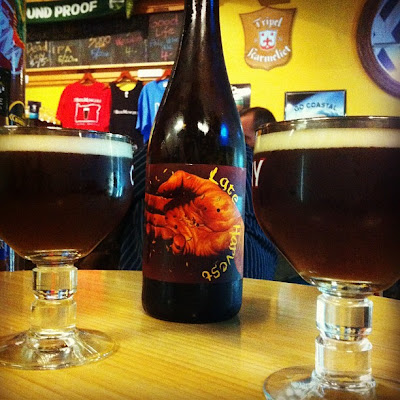 beermongers - the guy in the background was loudly arguing about arugula, i think

And APEX not only offers a varied and lengthy list of draft beer as well as a number of kitschy pinball machines, their comode helps sustain the most endearing meme we Portlanders have: 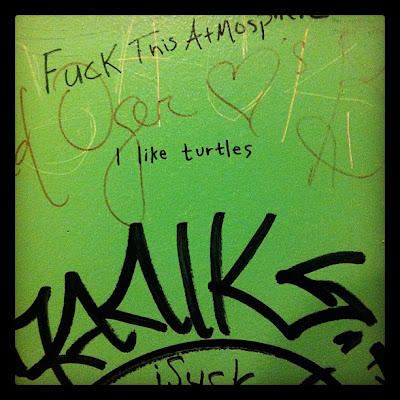 indeed we all do

So I’m in my pattern again: first stop in town is Alan Sprints’ Hair of the Dog taproom, a place which always provides me with a warm sense of home and comfort. I’ve long been a fan, so of course I am an unapologetic homer. I tend to gush about Hair of the Dog to anyone who will put up with me. Lately I’ve been obsessed with the Little Dog session beer series: massively dry-hopped low-alcohol beer created from the second runnings of such standbys as Adam, Fred, Doggie Claws and Matt. The taproom typically has two Little Dogs on tap at any one time, alongside a new feature at the bar: a special rotating barrel-treatment tap. Adam From the Wood, tapped on a Wednesday, kicked by Friday. Aged in Elijah Craig barrels for 3 years (or is it “at least 4”?), the strong bourbon character plays with the dense and robust tobacco, peat and sweet fig malt of the base Adam. The body, alcohol and sweetness combined are intensely satisfying and warming. If draft is any indication of what the bottles will be like, I have to suggest fans of this brewery stock up once Adam From the Wood is released at the Anniversary Sale on November 12th. Sadly I won’t be back in town for this event, but knowing the taproom stocks special releases for years, and at very reasonable prices, softens the sorrow. A future visit in town guarantees another Matt, Cherry Adam or Bourbon Adam experience. It’s actually very difficult to believe such a place exists in this world of limited admission, ebay rarity nonsense. The beer at Hair of the Dog is fantastic, some even consider it world-class, that’s been known for some time. But few know that the food is just as hearty and delicious. Pairing these burly traditional ales of the Pacific Northwest with the featured slow-cooked meat and pasta dishes is an experience every beer traveler should have while visiting Portland.

So I’m gushing on Hair of the Dog once again, sure, but still my cynical side is half-expecting a disappointing experience one of these days, that’s kind of how the world works, right? You fall in love with an establishment and visit it often enough to eventually have them crush your vulnerable and exposed foodie heart with uncharacteristically bad service or a lazily-prepared dish. It hasn’t happened yet, and now I’m naively thinking perhaps it won’t with these guys. But I’ve come to think that with restaurants and bars you have to approach it like a personal relationship: you get out of it as much as you put in. Approach the room and the staff with genuineness and kindness and engage the crowd of fellow patrons and you’ll undoubtedly have a wonderful time, and in turn you enjoy the food and drink more. But this traveler is easy. All it took was one glorious glass of bourbon-soaked Adam. 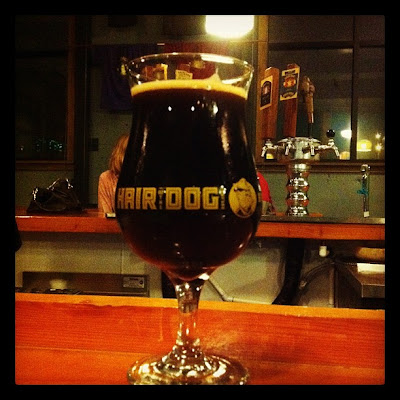 adam from the wood, surprisingly still on tap after 48 hours

Much love for the well-crafted high gravity ales that make Hair of the Dog famous, but the 3.5% second-runnings dry-hopped session ales mentioned before, these have captured me. This is it, friends. These small beers truly make me feel like I can give up this crazy hobby and just sit here for the rest of my life, settling into Don Younger-mode. On my stool. With my glass.

Speaking of which, his two beers on tap for the Horse Brass anniversary were fun to experience, but come with the sullen reminder of this great beer ambassador’s recent passing. So we have Don the Younger from Russian River and Rogue Younger’s 35th Anniversary ESB on tap at Horse Brass, followed down the street by multiple pints of a 3.2% smoked porter out of Oakshire Brewing in Eugene. Let me repeat that: OREGON IS MAKING 3.2% SMOKED PORTER I CAN’T GO BACK TO COLORADO. Alas I know I eventually have to return. Off I go into the evening drowning my sorrows in yet another glass of Little Dog. Back at Hair of the Dog, thinking about all of the absurd reasons I would even leave, eventually dinner is figured out and is followed by a bottle of the delectably beefy Matt (drink it for dessert, trust me). For a nightcap, oh, I don’t know, how about we spontaneously indulge in a 17-year old Adambier? 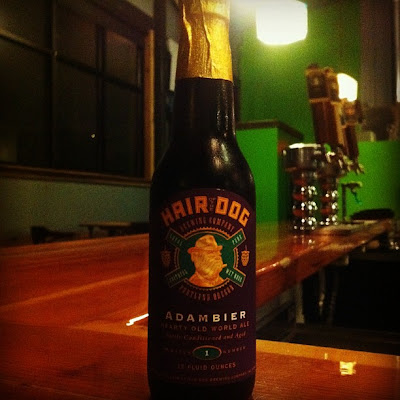 The $75 price tag for a single 12 ounce bottle is steep, and there are only four bottles on hand at the tasting room, but this beer isn’t going to be available forever, folks. Since first seeing it on the menu when the taproom opened, I knew I would pull the trigger some day, I just didn’t think it would happen this time in town. Ask yourself, if you have it available now, but come back in a few months or a year and find it gone, what then? Such a tragedy would rank up there with the very shameful and embarrasing passing over of the Eylenbosch Framboise Cuvee Speciale on hand at De Heeren van Liedekercke back in 2008. This sort of indulgence is what I travel for anyway, so when it’s in front of me this time, the decision to finally try this rare gem is actually an easy one to make. The bottle is brought out to warm up. 15 minutes later it’s cracked open and the first few whiffs are discouraging as the oxidation is overwhelming. I fear that this may have been a mistake. But with some time and aeration it begins to blossom, and the rich leather, peat and tobacco that define Adam begin to crawl out of the glass, eventually in concentrations large enough to overtake the oxidation. Adambier #1 is exceptionally dry and has an invigorating, prickly, lingering finish – the longest I’ve ever experienced with an Adam. The beer is past its prime for sure, and the oxidation is obviously heavy, but it tends to work in ways similar to decades-old bottles of Thomas Hardys, complimenting (and maybe even enriching) the dark fruit earthy malt character, though the dryness is certainly unlike any vintage Hardy’s or J.W. Lees bottles I’ve had. As objective as I can be with this brewery (which is “not very”), Adam batch 1 is undoubtedly a delicious experience and I’m glad it happened.

The remainder of my time in town was spent urban hiking and exploring bars, shops and breweries. A dozen or so new places visited; two new breweries (for me); a host of vintage junk stores and an eventual stroll through a zombie-themed Occupy Portland in downtown. This shanty-town encampment now spans three city blocks, only avoiding Officer Friendly and his Bulldozers thanks to the overpowering stench that resides somewhere between “wet ashtray” and “Iowa bovine feedlot”. The good news is that the movement has finally found a mission statement sure to win over the hearts and minds of the television-viewing homebodies: 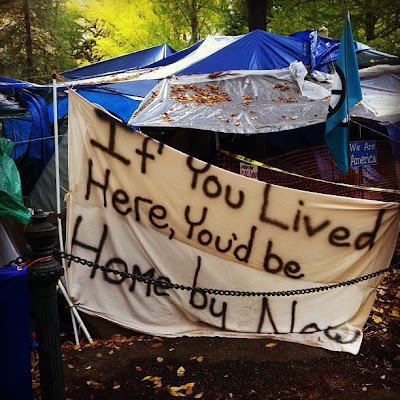 A rainy walk uptown brings me to Bailey’s Taproom for a taste of Heater Allen Bobtoberfest, a fall seasonal from the small lager-only operation based in McMinnville, Oregon. Bobtoberfest is a rich, sticky and crisp showcase of Munich malt. Well-made, sure, but not one of the beers that make me consider this small establishment based out of Oregon wine country the most talented lager brewery in the country. Heater Allen’s brilliance is showcased best in their Pils – described as Czech-inspired but considered by this beer traveler to be more German in nature – and their Coastal, originally a steam beer which slowly gravitated across to the Vienna style as the fermentation temperature dropped batch-to-batch. I hesitate to call them the best, but these two beers undeniably are the favorite American-produced lagers for me at the moment.

A few miles across town and a few hours later, my table fortress of empty Heater Allen Pils bottles was undergoing construction inside the Belmont Station Biercafe. I have to get my fill of these flavorful lagers during my short stays in town, see, because these unknown but magical beers don’t make it outside of Oregon. Alas it’s not all tears and pouting; I plan these infrequent visits specifically so I can get back to my favorites and enjoy them while on the road, an experience that would be more mundane and, well, normal, were I living in town. These trips to Portland allow me to explore the city with the excitement that a local just wouldn’t know. My time spent in town is always heartwarming and comforting, filled with special moments sharing good conversation and beer of outstanding quality, enriching established friendships and fostering new ones. I can’t ask for more than that. 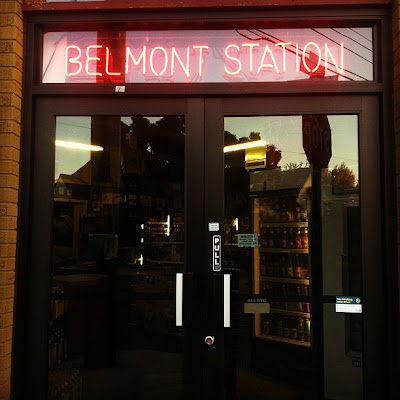 arguably the best beer store slash taproom in the country

But back home I must go. My last half-day in Portland is spent cracked out on cappuccino and stupidly grinning over a plate of delicious oyster hash while working on plans for the next great adventure in the Czech Republic. I’ve never loved lager as much as I do right now. This is happening, and it’s just over a week away.